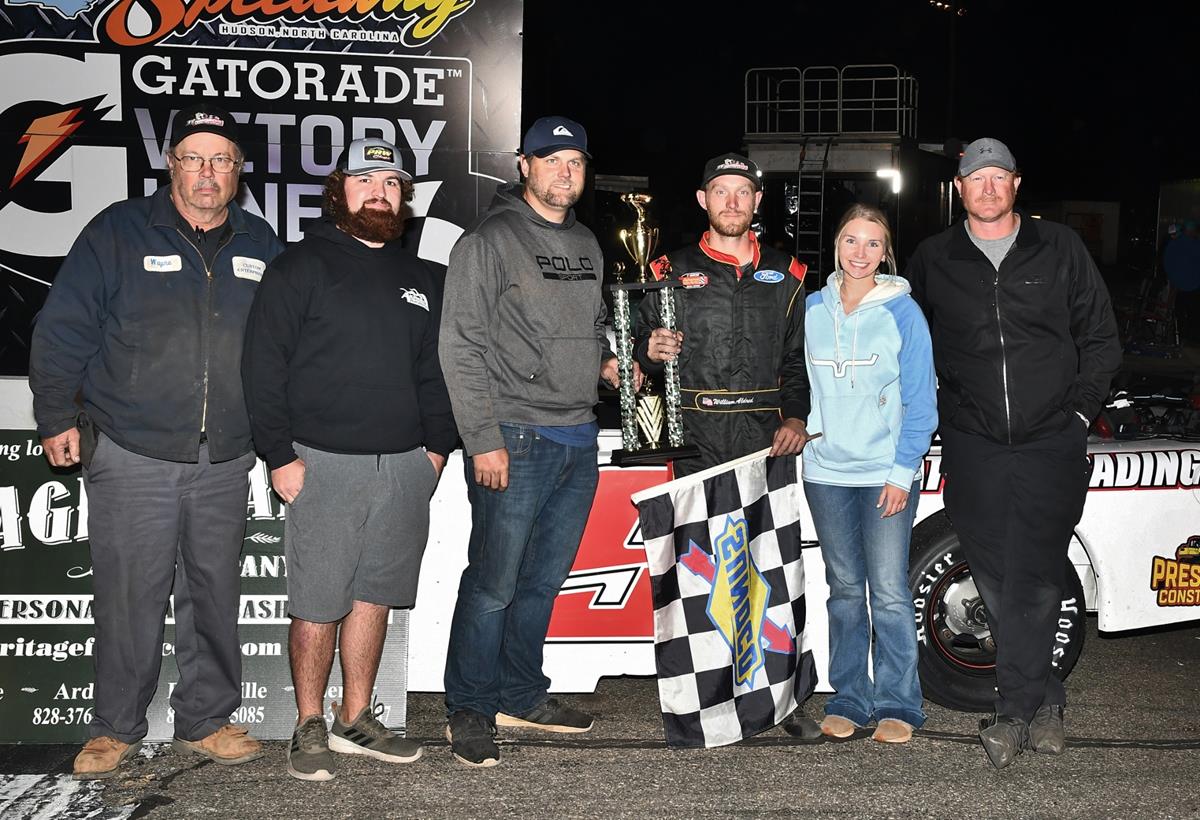 The first race of the evening was the first of two Limited Late Model events. Eugene Norton (#27) led the field to green after a qualifying speed of 15.918, 90.463 mph. It didn't take long for the first caution to fly. It occurred on lap 4 when Ricky Bruce spun in turn 2 with no damage. When racing resumed, it was green flag racing until lap 32. At that time, Dee McCall had an engine expire. The race was red flagged until the track clean up was complete. Once the race was resumed, Ricky Bruce had another incident. This one was on the frontstretch when he lost control and hit the outside wall. The race continued without incident after that. Eugene Norton (#27) held on to the #1 position to claim the win. He was followed in second by William Aldred (#9) and Austin Harris (#59) in third.

The second race of the night was the Vintage Division. Mark Whitten (#39) raced to the pole with a speed of 17.319, 83.415 mph. The race ran without incident. Don Fenn (#72) claimed his first win ever at Tri County. His car had the same color scheme as Benny Parson's (#72) from his championship year. Dennis Hinkle (#4) placed second and Mark Whitten (#39) fell to third.

The full moon rose and had full effect in the Front Wheel Drive Division. James Powell (this week in a #4) claimed the pole with a speed of 19.137, (75.246) mph. However, the first six were inverted. This left Scotty Garsnell (#42) to bring the field to green. The race was competitive but uneventful until lap 29. Jacob Hayes and Brian Dodd made contact on the backstretch. Hayes spun and hit the inside wall eliminating him. On lap 32, Brian Dodd came to a stop between turns 1 and 2 when his car lost power. After a push back to the pits, he got his car restarted and returned to the race. On the restart, James Powell moved to the inside of Gary Willard on the frontstretch. On the pass attempt, Willard took Powell to the inside wall in an attempt to block him. Powell retaliated in turn 3 by putting the bumper to Willard. This resulted in sending both cars into the outside wall. Both drivers were dq'd from the race for their rough driving. The time limit ran out in the FWD Division and no restart was attempted. This made Bradlee Jones (#11) the winner. Rayna Holland (#10) was second and Brian Dodd (#1) was third.

Street Stocks was the next race on the docket. Johnny Reynolds (#55) ran a fast lap of 16.901, (85.202 mph). However, the first three were inverted in this race. Davey Smart (#07) took the starting position. The only caution of the night was Kyle Boice spinning in turns 3 and 4 on lap 28. Johnny Reynolds held the point throughout and notched the victory. He was followed across the line by Kevin Eby (#03) in second and Cody DeMarmels (#12) in third. The 4th place finisher, Kyle Boice, won the $300.00 bonus money given by Leapfrog Landscaping for his effects.

The Renegade Division took to the track for their event. Klint Townsend (#9) had a fast lap of 19.301 (74.607 mph). However, the top 6 qualifiers were inverted. This left Jordan Cook to bring the field to green. The only incident of the race happened on lap 14 when Charlie Neill spun in turn 2. The race ended with Kevin Townsend (#9) completing his charge back to the front and claiming another win. Steve Smart (#16) was second and Charlie Neill (#18) finished third.

The second of two Limited Late Model events wrapped up the night of racing. The top six finishers from the first race were inverted for the last race of the night. Taylor Nesbitt started on the pole. On lap 7, 4 cars were involved in an incident in turn 3. The cars of Chase Ratliff, Austin Harris, Isaac Harris, and Eugene Norton were all involved. When racing resumed, the #59 of Isaac Harris rolled to a stop on the backstretch which brought out another caution on lap 9. The rest of the race was caution free. William Aldred (#9) claimed the win. Taylor Nesbitt (#92) was second and Chase Pollard (#17) third.

The children also enjoyed a Leapfrog race and were given a free slushie for participation. The race fans were also entertained by Spectator Racing. The red Chevy Silverado from Asheville was the winner for the night.

Thank you all for coming out and supporting Tri County Speedway and its drivers. Your support to the track, drivers, and local racing is very important. See you next Saturday, October 15th for Modified Racing! 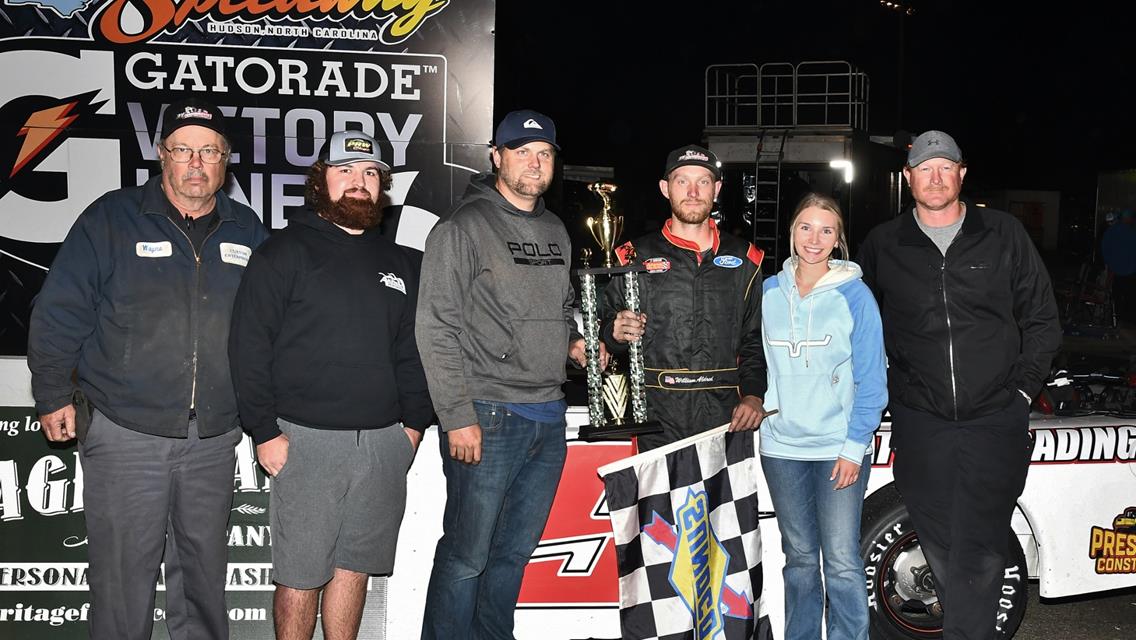 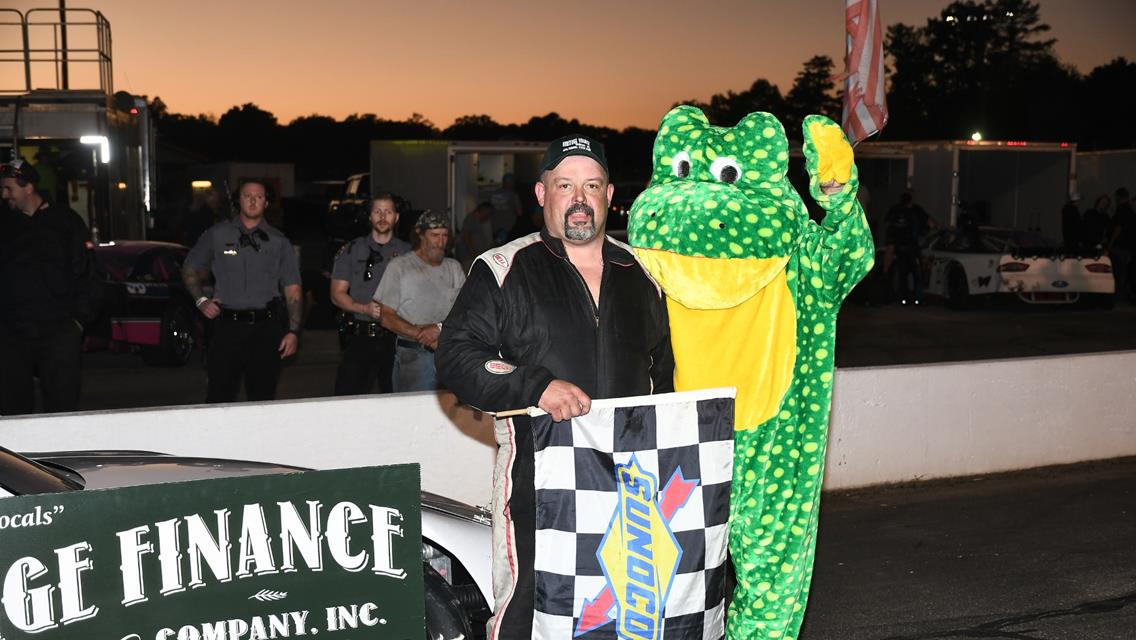