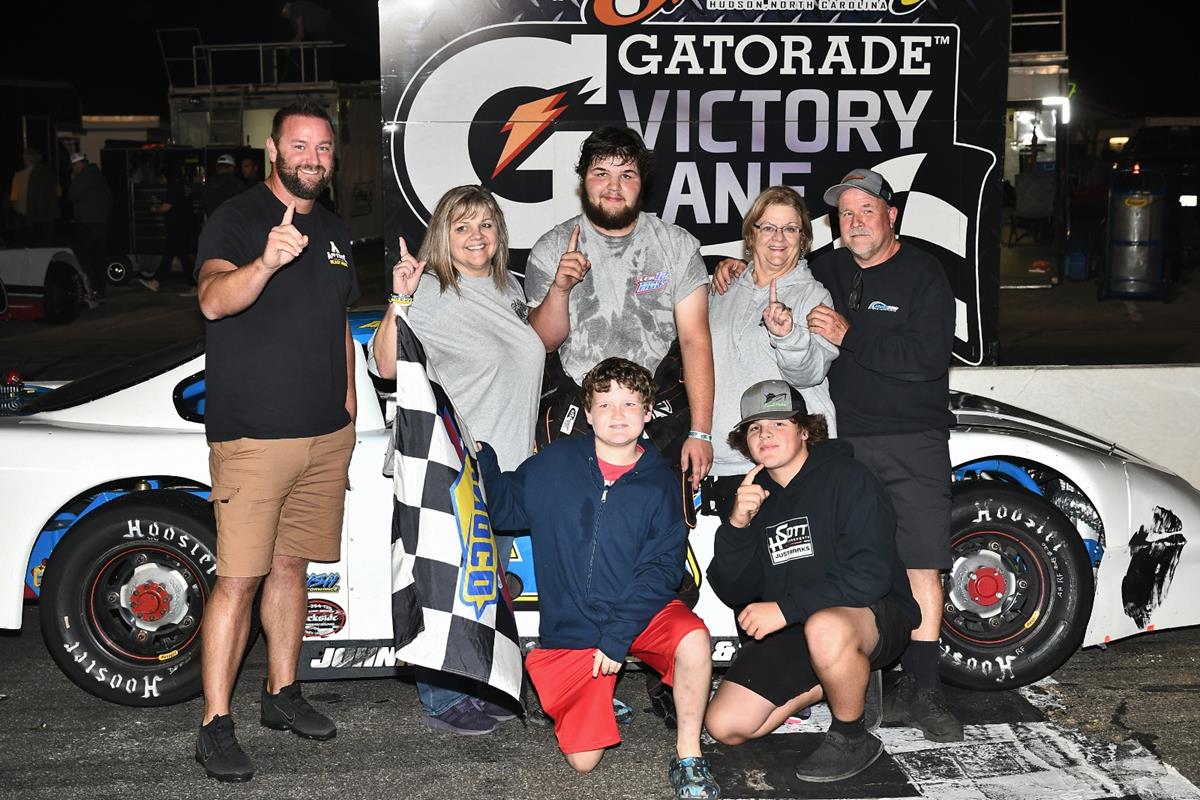 $5 Bring a Friend to the Races Night

The night started off with the always entertaining Renegade division. Klint Townsend (#9) won the pole with a speed of 19.269, 74.731 mph. The front 6 were inverted for the start of the race. Therefore, Shawn Thompson (#1.5) started on the point to take the green flag. Klint Townsend made his charge through the field and was crowded into the backstretch wall on lap 15 by Justin Austin (#1). Both drivers continued, but Austin spun in turn 4 the next lap. It seemed to appear he cut a tire in his altercation with Townsend. On lap 19, Steve Smart (#16) and Rodney Elkins (#18), had an altercation in turn 1. Klint Townsend once again secured another win in this 30 lap event. As a result, he also claimed $100 bonus from Leapfrog Landscaping for his effort. He was followed by Steve Smart in second and Rodney Elkins in third.

The Vintage car division was the second event of the night. Tim Gilbert (#95) pushed his Ford Falcon to a lap time of 16.797, 84.855 mph to secure the pole. The race ran without incident. Gilbert claimed the win, plus $150 bonus that Leapfrog Landscaping put forth for his efforts. He was followed across the line by Mark Whitten (#39) for second. Dennis Hinkle (#4) claimed the third position in the 20 lap event.

The third race of the night was the Front Wheel Drive position. James Powell (#27) claimed his customary pole attempt with a speed of 19.219. However, the top 6 were inverted for this race as well. This race was caution free for damage inflicted on cars. However, Gary Willard (#54) rolled to a stop in turn 2 on the third lap. Once racing resumed, the #0 car of Jacob Hayes rolled to a stop on the backstretch on lap 16. James Powell came from the 6th starting position to claim the win. Brian Dodd wrecked his car in practice and he climbed into the #1 car of Dana Maxwell. He nailed down P2 with the efforts. Animal Trent (#57 ) came home third. The third place finisher was also rewarded with a $200 bonus put forth by Leapfrog Landscaping.

Between races, an exciting event was added to the nights slate of events. Fans were given the opportunity to run a 1 lap race with another fan. Each race was started from a standing start on the frontstretch and raced back to the flag on the next lap. The Spectator Race included 2 economy cars, 2 trucks, and 2 Camaros. These folks signed up to compete for bragging rights and a trophy. Austin Letterman in a Toyota Tacoma defeated a Ford Ranger in the first race. Ethan Boyles in a Fiat defeated the Ford Fiesta driven by Jacob Smith in the next race. A pair of Camaros squared off in the final race. It resulted in the Camaro of John Reynolds defeating the Camaro of Richard Mare. Reynolds entertained the fans with a Nascar style burnout after his win.

Regular racing returned to the track in the form of the Outlaw division. Shelton Clay (#15) was the fast qualifier with a speed of 15.676, 91.860 mph. Once again, the race was started with the top 3 qualifiers being inverted from their qualifying attempts. It proved to be one of the most exciting races of the season. There was side by side action for the duration of the event. All 3 top finishers crossed the line within 1/2 second of each other. Martin Nesbitt (#92) claimed the hard fought win with Rock Harris (#59) a very close second. Shelton Clay (#15) followed in third in the hard fought race.

The Street Stock Division was the next race on the agenda. Gary Ledbetter (#32) had a fast lap of 16.968, 84.865 mph which earned him the top starting spot. However, the top 5 were inverted to place Davey Smart in the favored #1 position to take the green flag. This race ran caution free. Gary Ledbetter reclaimed his #1 position with a win. Ledbetter was followed across the line by Kevin Eby (#03) in second. Cody DeMarmels (#12) was third on the night.

The Limited Late Model Division capped the nights events. Eugene Norton (#27) earned the top spot with a speed of 15.970, 90.169 mph. Norton was challenged by an anonymous fan with a $300 bonus. He had to start in the rear and come back to win the 50 lap feature. He declined the challenge. Don Carlton was crowded into the wall on lap 1. That resulted in a multi car accident in turn one. Upon restart, Marvin Miller spun on the backstretch to bring out another quick caution. Another incident in turn 2 brought out the caution once more. Jonathan Philyaw and Eugene Norton made hard contact. Philyaw was done for the night and Norton had to come to the pits for damage he sustained in the accident. The racing settled down after that. The race ran caution free for the remainder of the race. Austin Harris (#59) won the night's final event. Jacob York (#97) placed second. Taylor Nesbitt (#92) came home third.

We trust everyone enjoyed the night of racing. Saturday, October 1, will feature the Pro Mod Minis and the Street Stock division.