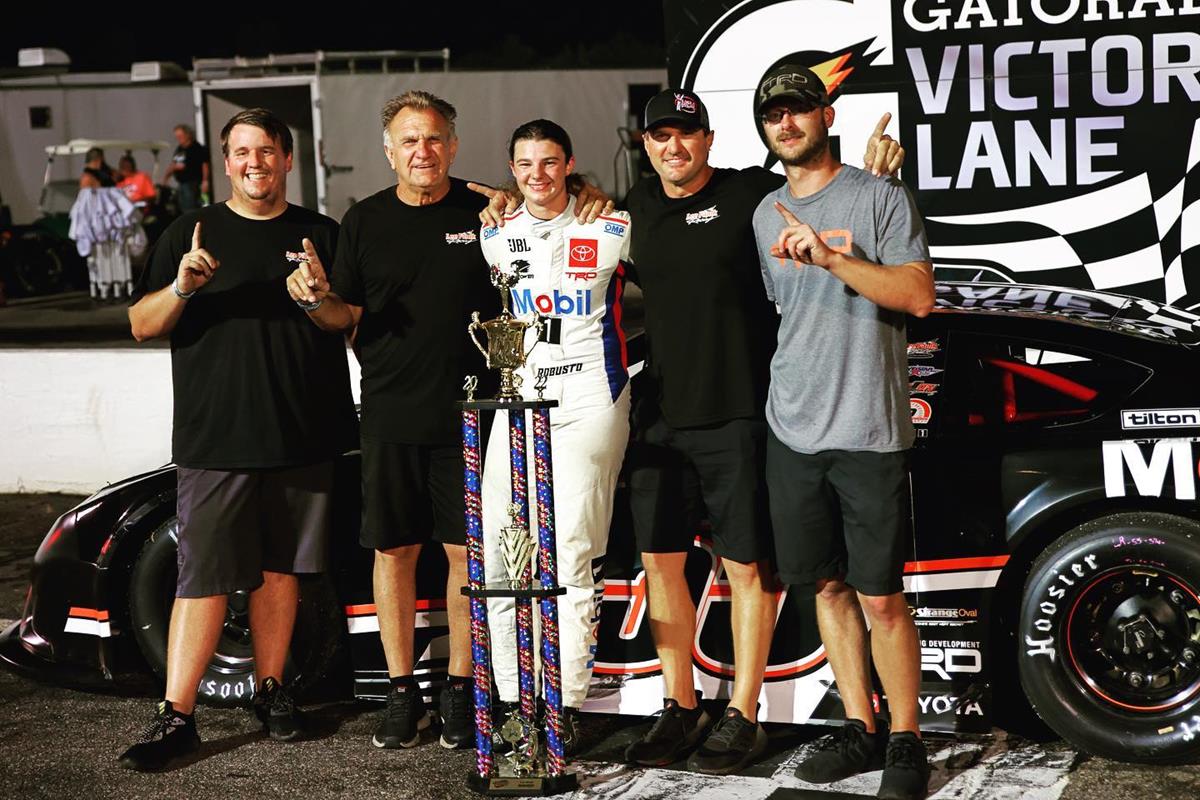 This past Saturday night, Tri County ran right up until their 11 pm curfew time. Rain was the culprit. All races were shortened and two divisions were eliminated. The Vintage Division and the Street Stock teams will be admitted free next race and run double features to make it up to the teams and fans.

The first race of the night was the Limited Late Model Division. Austin Harris (#59) had the pole winning speed of 16.077, 89.568 MPH in the 13 car field. In this race, the first three cars were inverted. The first caution flew on lap 6 when Chris Smith (#48) spun in turn 4. The second caution flew on lap 28 for rain. Even though the rain delay was 2 1/2 hours, the fans stuck around to watch the conclusion of the night's events. The drivers seemed to think, that after a long period of time, the track was race ready. Upon resumption of the race, the car of Junior Franks spun in turn two. He relayed that the track was still wet in that area and the race was stopped once more. The Front Wheel Drive Division took to the track in the interim, followed by the Renegade Division. These divisions both had treaded tires and weren't affected by the dampness. The plan worked. As they ran their races, the track dried completely. Once the Limited Late Models returned to the track, they picked up where they left off. Chris Smith still had his troubles. He spun on the back stretch on lap 29. With just a few laps left, he spun once again on the front stretch. This time he made heavy contact with the inside wall. This incident finished his night. Taylor Nesbitt (#92) notched another victory when the checkered flew. She was followed across the finish line by Austin Harris (#59) second and Don Carlton (#14) third. All divisions that ran were shortened by the impending curfew of 11:00 pm.

As mentioned earlier, the Front Wheel Drive ran their race to take advantage of their treaded tires. Rayna Holland grabbed the pole with a speed of 19.539, 72.220 MPH. However, the top 6 qualifiers were inverted for the start of the race. On lap 8, Brian Dodd was the reason for the first caution. He spun and hit the backstretch wall. When the race restarted, Dana Maxwell lost control in turn 2 causing a caution once more. Once the shortened race was completed, Jason Garwood (#46) came home the winner. He was followed by James Powell (#27) in second and Gary Willard (#54) third.

The Renegades had Klint Townsend running a fast lap of 19.288, 74.657 MPH. The top 4 qualifiers were inverted for the start of the race. Klint Townsend (#9) came back to finish first in the division. He was followed across the line by Rodney Elkins (#18) second and Steve Smart (#16) third.

The Late Models then had their turn on the track. Isabella Robusto had the fast qualifying time of 15.573, 92.467 MPH. However, the top 6 were inverted in this race as well. The planned racing laps were cut from 75 to 60 due to the 11:00 curfew. Isabella Robusto (#55) proved that Taylor Nesbitt wasn't the only female that could win on this night, as she claimed another win. Connor Zillich (#57) crossed the line second in the caution free race. Thomas Beane (#28) nailed down the third position.

The Outlaw Division had a planned 40 lap race. Their race was also shortened due to the curfew. Sheflon Clay had the fast lap of the night with a speed of 15.577, 92.433 MPH. The race ran caution free and the checkered flag fell at 10:59 pm. This insured a cool down lap and engines off by the 11 pm curfew. Sheflon Clay (#15) held a tight hold on his #1 starting spot and came home the winner. Rock Harris (#59) was second and followed by Martin Nesbitt (#92) in third.

Because of the rain delay and time constraints, the Vintage Division and the Street Stock race were not able to get on the track. Both divisions, including crews and drivers, will be allowed through the pit gates free for the next scheduled race. The plan is that both divisions will run double features next time at the track. The CARS TOUR will be at Tri County on September 10th. The next regular scheduled race is September 17th. Hope to see you there!