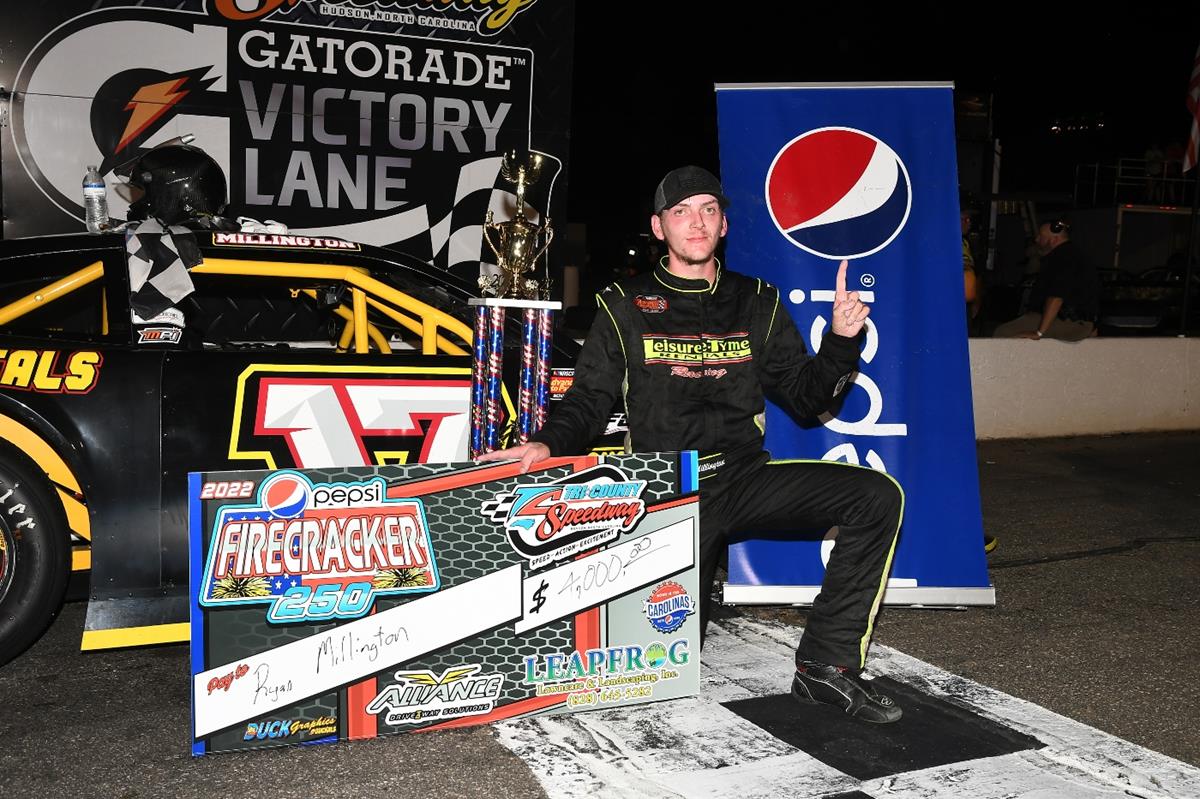 On Saturday, July 16, 2022 many interesting things happened at Tri County Speedway. A late model driver won $40 for every lap he completed or $100 per mile. A 57 year old driver won a feature event. Another driver started from the very back of the field, with only 5 laps remaining, and only lost by one car length. To top it off, the legendary Tommy Houston was on hand to sign autographs! Last of all, fireworks capped off the night. The night's events included six races.

The first race of the night was the Renegade division. Klint Townsend claimed the pole with a speed of 19.234, 74.867 mph. However, the entire field was inverted for the start of the race. This resulted in Gage Austin (#4) bringing the field to green. The race ran without incident but there was plenty of action. Townsend (#9) came from starting shotgun on the field to taking home the trophy. Finishing second was hard charging Steve Smart (#16) and Skylar Hudson (#25) rounded out the top 3.

The Vintage division was the second race of the night. Marty Ward was fastest in qualifying with a lap time of 16.650, 86.486 mph. The only incident of the race was on lap 10 when Dennis Hinkle spun in turn 2. Subsequently, he retired from the race. Marty Ward (#41), a 57 year old driver out of Marietta SC, went on to win the event. Tim Gilbert (#95) was runner-up. Gilbert's son, Eddie Gilbert (#39) was third.

The Front Wheel Drive division proved to be an interesting race. There was no shock to the fact that James Powell (#27) won the pole for the event with a lap speed of 19.311, 74.491 mph. The interesting part came as the race headed near the end. Since Powell dominated in the division, Powell was made to start in the rear. Therefore, Donny Holland (#10) was first to see the green. The only true incident occurred on lap 4 when Brian Dodd spun in turn 4. Once racing resumed, James Powell quickly moved from the back of the field to claim the number one position. Per a prearranged agreement with the track and Powell, a caution flag came out on lap 15. The sole purpose for the yellow was to have Powell go to the back once more. Track owner Shad Higgins offered Powell a bonus out of his own pocket if he could still win the race. Although it didn't happen, it appeared for a while that it would. Instead, Donny Holland (#10) broke Powell's stranglehold on the winner's trophy by winning the event. Powell (#27) finished second and Jacob Hayes (#0) finished in third.

The Limited Late Model was the 4th race on the card for the night. Austin Harris was the fastest with a speed of 15.895, 90.594 mph. The starting order inverted the top 6, meaning William Aldred (#15) would start p1. There was a major crash in turn 2 which caused a lengthy clean up. The restart order also had to be straightened out. Once racing resumed another caution flew for debris (a door from a car involved in an earlier crash came loose). The only other caution came out on lap 12, when 3 cars again come together in turn 2. Austin Harris claimed the win in the (#59) car. He was missing his door, hood and front fender from the first crash. Taylor Nesbitt (#92) came home second and Don Carlton (#14) finished third.

The Street Stock division was the 5th race of the night. Gary Ledbetter (#32) had the fast lap in prep for the race with a speed of 17.078, 84.319 mph. Once again, the top 6 were inverted for the start of the race. This placed Blake Walker on the pole. This was Blake's first full race in the Street Stock Division and he looked strong early on. Blake's strong run came to an end on lap 12. He was involved in a crash on the backstretch which involved multiple cars. Unfortunately this ended his night, along with some others. Boo Carlisle (#00) was the reason for the next caution on lap 13. Once racing resumed, it ran caution free. Gary Ledbetter (#32) scored the victory. Davey Smart (#07) was runner-up and Boo Carlisle (#00) came home third.

The much anticipated Late Model race was the last event of the night. Conner Mossake (#28) had the fast time of the night with a speed of 15.433, 93.306 mph. The first 50 laps ran without incident. Ryan Millington take the caution at lap 50, for a 10 minute break. In finishing the first segment as the leader, he won a bonus of $1,000. On the restart, the top 5 finishers in the first half were inverted. The first caution flew on lap 52 when there was a spin in turn 2. Green flag racing was short lived as another caution came out on lap 54. This time 3 cars got together in turn 2. Clean up was quick and racing resumed. The yellow flag came out once more on lap 87. Upon restart, the racing was furious. Ryan Millington again moved back to the lead and never looked back. He claimed the purse of $3,000, along with the halfway leader bonus of $1,000. He took home a total of $4,000 for his night's efforts. It didn't come easy though, Connor Zillich (#57) challenged him hard for the win but came up short and finished second. Isabella Robusto (#55) finished out the podium finish in third.

Thank you for coming out tonight! We trust you enjoyed good family entertainment and some of the best track food anywhere in the southeast. Tri County Speedway's next race will be Saturday, August 6th. See you there!