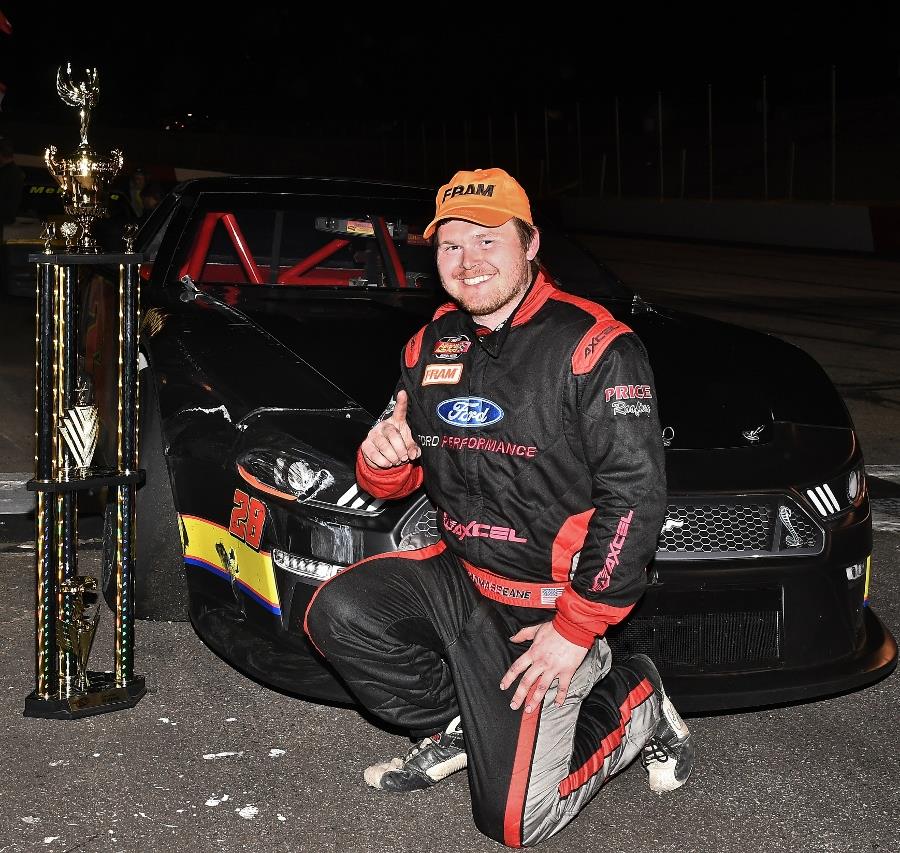 Opening Night at the Races

The first race of the night was the Renegade division. Dillon Crouch led the field to green. Before a lap was turned, the caution flew for an incident in turn 2, with the #72 car of Zach Mullins spinning. There was a total restart, since a lap wasn't completed. Mullins started in the rear. On the restart, Mullins got into the #9 car of Klint Townsend. This caused a melee in the first turn, also involving the cars of Shawn Thompson and Skylar Hudson. It was determined that the accident was avoidable and Mullins was parked for the night. Things went well until lap 14 when Klint Townsend had a motor blow that ended his night. Lap 18 saw the caution once more for the spin involving Shawn Thompson. The 35 lap feature saw Gary Ledbetter come home the winner. Rodney Elkins was second and Dillon Crouch was third.

The second event was the Vintage division. It ran caution free. Bob Haybmen claimed the pole and the win. Tim Gilbert was second and Eddie Gilbert was third.

Third race of the evening was the Limited Late Models. Don Carlton started from the pole, but had issues bottoming out and relinquished the lead thereafter. The first caution of the night came out on lap 17. Junior Franks, Marion Thomas and Chris Smith all had issues. It seemed apparent that fluid was put down prior to the incident. The red flag was put out to clean up the track. Once the race returned to green, it was caution free. Austin Harris #59 claimed the first win of the year. Dennis Gammons was second, while Taylor Nesbitt was third.

The next race on the docket was the Front Wheel Drive division. Gary Willard was the pole sitter for the event. The first caution in the 30 lap event came on lap 22. Rayna Holland stalled in turn 3. The next caution came out on lap 25 when Jacob Hayes and James Powell came together in turn 4. Once the race was restarted, Danny Holland spun in turn 1 bringing out the caution once more. The end of the race saw Blake Walker appear to capture the win, but he failed post race inspection. James Powell inherited the win. He was followed by Jacob Hayes second, and Donny Holland third.

The Street Stocks took to the track for the night's fifth race. Johnny Reynolds was the pole sitter for the race. Only 1 caution flew during this race. It was on lap 5 and that was to check for fluids on the track. At the conclusion of the race, Gary Ledbetter, #32 took home the trophy. Cody DeMarmels was second, followed across the line by Kevin Eby in third.

The 60 lap feature event of the night saw the Late Models take to the track. The top 4 were inverted from their qualifying positions. Michael Faulk #12 started from the pole. Isabella Robusto spun on the front stretch after being tagged on lap 25. The caution ensued once again on lap 26, when Eugene Norton spun in turn 4. Lap 43 also saw Norton involved in another caution in turn 3 with Zack Franks. Lap 48 saw the night's final caution when Matthew Gould spun in turn 2. After a restart was called off, and a subsequent restart, the event finished without incident. Thomas Beane claimed the first win of the young season, with Michael Faulk second, and Eugene Norton third.

All of us at Tri County were glad you chose to spend the evening with us and trust you had a great time. If you haven't tried our concession stand, please do so. You won't find better track food anywhere. We hope you come back next week. Be ready to cheer for your favorite driver and enjoy the excitement of the races!